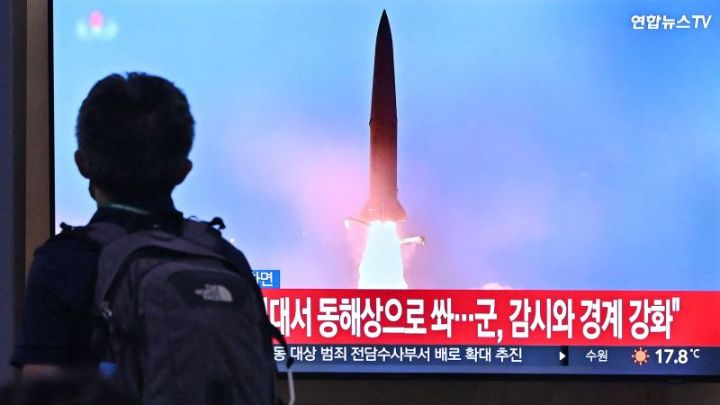 10-10-2022: Devoid of context, an observer might assume that the missile launch recently enacted by the Democratic People’s Republic of Korea (DPRK or “North Korea”) which was lofted over Japan was yet another example of a “rogue regime” threatening its otherwise peaceful neighbours. In context, however, this missile launch along with every other one the DPRK has conducted this year is a rational response to the intense war provocations thrown at it by US imperialism. In fact, the DPRK has every right to go much further than mere warning shots. The USA, Japan and the Republic of Korea (ROK) conduct war games every year on the very outskirts of the DPRK, in which they literally train for the invasion and overthrow of the government headquartered in Pyongyang. Japan and the ROK are in practice satraps of Washington, with the Pentagon more or less controlling not only their foreign policy, but to a large extent even the maintenance and movement of their respective militaries.

The DPRK has little option but to constantly adopt the Songun[1] or “military first” policy, given that the US Empire has never forgiven it for fighting them to a standstill during the horrific 1950-53 war. The US has refused to sign a peace treaty since that time and has done everything it can to bring about the overthrow of the independent DPRK – yet still it stands. To survive, the DPRK must first allocate economic resources to its military, or face annihilation at the hands of the US war machine. Its military prowess is only a deterrent, but it is one which they have no choice to develop. In January this year, the DPRK tested train launched short range ballistic missiles (SRBM), believed to be the KN-23, KN-24 or KN-25 models.[2] In its military parades in 2021, the DPRK showcased a submarine launched ballistic missile (SLBM) which was even larger than its famed Pukguksong-5 missile, but it is believed this has not yet been flight tested. The missile launch which attracted the most international attention was likely to be a Hwasong-12 liquid propellant intermediate range ballistic missile (IRBM), which travelled 4600 kilometres (klm) with an altitude of 1000 klm. This was the one which sailed over Japan and appeared to have been launched from the DPRK’s Jagang Province.[3]

On top of the annual US led war games the DPRK is subjected to, this year US Vice President Kamala Harris has simultaneously visited Panmunjom in the so-called De-Militarised Zone (DMZ) on the ROK/DPRK border. This is yet another Nancy Pelosi style provocation, despite Harris uttering a jaw-dropping gaffe by saying that the US has a very important alliance with “the Republic of North Korea”.[4] Like President Biden, Harris is all but a carboard cut-out which covers for the US “deep state”, which is careening towards a nuclear confrontation not only with the DPRK, but simultaneously with Russia and China. Despite the dynastic succession of the Kim family at the head of the DPRK, by comparison it is a picture of calm-headed and judicious decision making. On October 6th, the DPRK government via the Korean Central News Agency (KCNA) issued a statement condemning the US and some of its allies for referring the DPRK to the United Nations Security Council (UNSC).[5] They correctly stated that their missile tests are a rational response to the escalated tensions created by the US/Japan/ROK military exercises, and pointed out the US has ratcheted up the precarious balance even further by again dispatching a US carrier strike force to the waters of the Korean peninsula. One can only imagine the response of the US if the DPRK conducted “military exercises” off the coast of California!

DPRK capitulates on the “epidemic”

Despite over 70 years of reckless war provocations against it, the DPRK has steadfastly insisted its military will only ever be used to defend itself. In a speech in 2021 marking the 75th anniversary of the Workers Party of Korea (WPK), Supreme Leader Kim Jong Un stressed that the DPRK’s military will never be used or abused as a means for a pre-emptive strike, will never be aimed at others, and will only be used for the defence of the nation.[6] Suffice to say, this contrasts sharply with the endless war manoeuvres of NATO and the European Union (EU) currently. Interestingly, Russia-DPRK relations are strengthening in the wake of NATO’s war on Russia via Ukraine. The DPRK was one of only four nations to defend Russia at the UN from day one of its De-Nazification operation beginning in February. The other countries were Belarus, Syria and Eritrea. Also, Syria and the DPRK were the only non-Russian countries to officially recognise the Donbass Republics (Donetsk and Lugansk).[7]

What is more, the DPRK Ambassador to Russia, Shin Hong Chol, announced that both cargo and passenger rail traffic between the DPRK and Russia’s neighbouring Primorsky Krai region would resume in September,[8] after two years of interruption due to “Covid”. Unfortunately, despite the DPRK bravely and heroically defending itself against Western imperialism for over seven decades, its political leadership capitulated to its’ nemesis on the fraudulent Covid “pandemic”, which it referred to as an “epidemic”. To its partial credit, the WPK resisted overwhelming pressure for mass vaccinations, and refused potentially deadly Covid “vaccines” from both China and the UN (“Covax”).[9] However, it did lockdown the borders of the DPRK, imposed suffocating facemasks, and occasionally enforced nonsensical internal lockdowns. Aside from the physical harms caused by such actions, the act of abject yielding to perhaps the largest political attack on the global working class in history sets back the defence of the DPRK and the other remaining bureaucratically deformed workers’ states.

It is indisputable that the DPRK, against all odds and withstanding unimaginable sacrifices, has created a proletarian state which delivers unparalleled benefits to its working class. Among these are constitutionally guaranteed employment, free housing, free education, free health care and the right to paid holidays.[10] At the same time, the WPK upholds and maintains a leadership cult in which unquestioned adulation of the Kim family is used to prevent alternative pro-socialist views being mentioned, let alone implemented. The WPK also oversees extreme versions of the twin Stalinist policies of “peaceful coexistence” and “socialism in one country” – which in practice amount to “socialism in half a country”. To break out of this, a proletarian political revolution is required to return to the politics of Lenin and Trotsky, not Stalin or Mao, or even Kim Il Sung. Despite this, workers internationally need to defend the DPRK against extremely dangerous imperialist war moves which are also a direct threat to the neighbouring People’s Republic of China (PRC). Hands Off the DPRK!