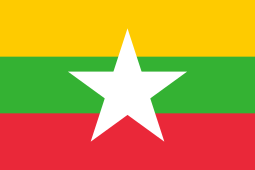 The national flag of Myanmar, which was adopted in 2010.

15-09-17 – We were told there were “rebels” in Libya – but they turned out to be Al Qaeda. We were then told there were “rebels” in Syria – but they turned out to be ISIS. If we were now to believe that there are “rebels” in the Rakhine state of Myanmar, we would have very short memories indeed. And, as if on cue, Al Qaeda has now chipped in, declaring that any deaths of Rohingya Muslims will be avenged, and that the government of Myanmar will be punished.[1] The horrific imperialist game of regime change appears to be on again.

If you are thinking that all this is just a little too convenient, you are not alone. No sooner is the US Empire facing a serious defeat in Syria, it turns its attention to other countries and regions, where it has been working away behind the scenes for decades, undermining and white-anting any country perceived to be independent of them, or, worse still, engaging Red China to assist them with their trade and development. Any of the Asian nations that have the temerity to consider China a partner rather than the US, sooner or later will find chaos erupting within their borders, if not an open hybrid “humanitarian” war. The current situation in Myanmar, despite all of its unique history, is yet another case.

Unlike in Syria, where the Syrian government was regarded by the US as an opponent going back to the 1950s, the National League for Democracy (NLD) government led by Aung Sung Suu Kyi was a product of US and UK backed NGOs over some decades. The “Land Destroyer” blog site reveals that the US and UK have spent tens of millions of dollars creating the NLD/Suu Kyi led government in Myanmar, filtered through liberal para-state “civil society” organisations. The notoriously misnamed “National Endowment for Democracy” (NED) is in on the act, as is the infamous Open Society Institute (OSI) of colour revolution specialist and billionaire financier George Soros. The US funded broadcaster Voice of America (VOA) beams in disguised pro-Western propaganda three times a day, while the Orwellian named Radio Free Asia (RFA) pumps Myanmar with pro-capitalist missives through a two hour “news service” every day.[2] The “Burma (the previous name of Myanmar) Campaign UK” group openly chastise the UK’s Department for International Development (DFID) for a lack of funding and backing for “democracy promotion”.[3] It would be funny if it wasn’t so serious. By “democracy” these apologists for US/British imperialism mean a government which will do the bidding of Washington and London, rather than exerting any shred of independence from them.

As recently as 2012, Aung San Suu Kyi was awarded the Congressional Gold Medal, the highest civilian honour the US Congress can award.[4] To give you an idea of just how comfortable Aung San Suu Kyi was with the inner sanctum of the US Empire, she welcomed a visit from Hilary “Destroyer of Worlds” Clinton in 2015, at the peak of her powers before later being defeated by Trump in 2016.[5] So if Suu Kyi was the apple of the eye of Uncle Sam as little as a year ago, why is she now targeted by the Empire’s vassal NGOs, and is being asked to hand back her Nobel Peace Prize?

In a word, the New Silk Road. The New Silk Road, or One Belt One Road initiative led by the People’s Republic of China, is an infrastructure and economic growth building plan, reported to be seven times larger than the US sponsored Marshall Plan for Europe after the destruction of the Second World War. 1.3 trillion dollars of projects have been announced so far, with more to come. Amongst other things, it seeks to link China’s western provinces to South East Asia, Africa, Central Asia and Europe, reviving the Silk Road trade routes of ancient times[6], but using China’s well renowned modern state owned railway and port projects. Aung San Suu Kyi was one of the 29 world leaders who attended the launch of the mega- project in Beijing in May of this year,[7] signing up Myanmar as a founding member. This appears to have been the final straw for the Wall Street. Already reeling from the rise of China, losing influence amongst South East Asia to socialist China was too much to take. As little as a few months later, a crisis emerges for the Rohingya people of the Rakhine state in Myanmar.

To be sure, the history of tensions between the Muslim people of the coastal Rakhine state in Myanmar and the majority Buddhist population goes back some years before the launch of the New Silk Road. But now outside forces, who bear no relation to the Rohingyas themselves, have an opportunity to sow chaos and disorder, which at the least, can disrupt the greater economic ties between Myanmar and China. At most, it could provide a beachhead for the entry of US troops, or their proxy forces, in yet another “humanitarian war”. This beachhead could then be a part of the real aim of the US “pivot to Asia” – the military encirclement of Red China; which is the 21st century version of “containing and rolling back communism”.

Working people need to be clear. China overturned capitalism via its victorious socialist revolution in 1949. Therefore, the Chinese economy today does not operate primarily on the basis of production for private profit. Its expanding foreign investments do not take place in order to maximise profit, but in order to secure resources for its own economic development. As a quid-pro-quo, China’s non-exploitative development projects in other countries also offer the opportunity for much need economic growth, especially in the Third World. This is because roads, ports, railways etc. – inevitably lead to increased commerce. In fact, some of the First World economies can also benefit from these projects, given that they are in a dire capitalist fuelled recession of their own. Thus, despite ties to the US, the Australian government felt compelled to send a delegation to Beijing for the launch of the New Silk Road. The comparison is stark – socialist China offers Asian, African and European countries opportunities for mutually beneficial development; while the US Empire offers nothing but plunder and war. And if it looks like you are a friendly neighbour to China – as Myanmar is – be prepared for chaos to be unleashed.

The history of the tensions of the Rohingyas and the Buddhists in Myanmar requires a separate study, and certainly does predate China’s New Silk Road mega-projects. Yet it is extremely suspicious when the so-called Arakan Rohingya Salvation Army (ARSA) makes a spectre-like appearance, armed to the hilt, and then begins armed attacks on the Tatmadaw – the armed forces of Myanmar. Suspicions are confirmed when it becomes known that ARSA – formerly known as Harakat al Yaqin (HaY) – is being funnelled cash and weapons from Malaysia, Pakistan and..wait for it…Saudi Arabia. The Rohingya diaspora has led to large Rohingya populations being established in Malaysia and Pakistan, and the ARSA even has a leadership council based in Saudi Arabia.[8] With US state support, Saudi Arabia was one of the strongest backers of the genocidal Wahabist “rebels” in Syria, which at great cost were defeated by the Syrian government with the assistance of Russia. Now in Myanmar, we see the same playbook being rolled out again. Yet, as in Syria, the Saudi armed Rohingyan “rebels” no more represent the Rohingyan people, or Muslims, any more than Al Qaeda and ISIS “represented” Muslims in Syria.

Nor does the “Buddhist Bin Laden”, monk Ashin Wirathu, leader of the ultra-nationalist 969 group in Myanmar represent all Buddhists. The 969 group are said to have been behind a wave of sectarian anti-Muslim riots which have killed scores since 2012.[9] More than this, these “monks” were the most active in organising vigorous protests against the Myanmar government’s move to give hundreds of thousands of stateless Rohingyas citizenship. These protagonists of the “Saffron Revolution” are in fact ultra-violent, bigoted and racist in a way which would rival the Ku Klux Klan in the US.[10] Yet this is part of the support base for Aung San Suu Kyi, and are thus presented to unsuspecting Westerners as liberal pro-democracy activists! Once again, the Western media and Western funded NGOs have covered for the real aims of the US Empire – the installation of a subservient pro-Western government, regardless of who their domestic allies may be. Whether the allies be ultra-violent Buddhist nationalists in Myanmar, Nazis and fascists in Ukraine, ISIS in Syria and the Philippines, or Al Qaeda arming the Rohingyas – the corporate media will portray them as “rebels” or their actions as a “democratic uprising” !

Unfortunately, some Australian left parties appear to have repeated their error-ridden actions from the wars on Libya and Syria, where they backed “rebels” even when it became clear that the “rebels” were in fact genocidal Al Qaeda linked mercenaries. Already the Al Qaeda link to the Rohingya “rebels” has emerged in Myanmar, but this seems to have been overlooked by the Socialist Alliance[11], Socialist Alternative[12], and Solidarity[13].  There are some indications that the Communist Party of Australia, which at best offered only lukewarm opposition to the US led wars on Libya and Syria, have followed suit.[14] Despite their anti-war credos, these organisations are lining up with the decidedly pro-war NGOs in Myanmar, as they did in Libya and Syria. The lessons haven’t been learnt. The whole raison d’etre for these para-state NGOs (Human Rights Watch, Amnesty International) is not to advocate “human  rights” and “democracy”, but the very aims of the US Empire itself. In the case of Myanmar, it is currently about creating chaos in the Rakhine state, fostering armed extremism (yet again), disrupting China’s New Silk Road, bringing Aung San Suu Kyi and the Myanmar government to heel, and extending and consolidating the military encirclement of Red China. Chaos and war on China’s southern flank can only benefit Wall Street, and, combined with the provocations in the South China Sea, the threat of nuclear war against the Democratic People’s Republic of Korea (DPRK), the backing of anti-socialist jihadists in Xinjiang, the Lamas in Tibet and the never-ending war on Afghanistan, the picture comes into sharp relief.

For an anti-imperialist anti-war movement

Workers desperately need an anti-imperialist anti-war movement, to lead a struggle against the endless machinations and regime change wars being prepared against China and Russia, and any country that even has thoughts of independence from the US Empire. In the case of Myanmar today, while not offering political support to the NLD government or its supporters, working people should defend the right of Myanmar to determine its own affairs without interference from US state and para-state actors, up to and including the right to complete trade and investment opportunities with China. After all, China is a next door neighbour. Without Western meddling, it is likely that the 135 ethnic minorities which make up Myanmar would co-exist, as they did for decades previously. Despite the grim scenarios, we should be confident that the overwhelming majority of working people here and internationally are opposed to a world war, and would be prepared to take action to prevent it. What is currently absent is the leadership of a workers vanguard party. Such a party could lead working people in a struggle to eliminate the source of imperialist war – the decaying capitalist system – by fighting for a workers’ republic, linking with the vast proletariat in Asia to aim for an internationally planned economy. HANDS OFF MYANMAR!