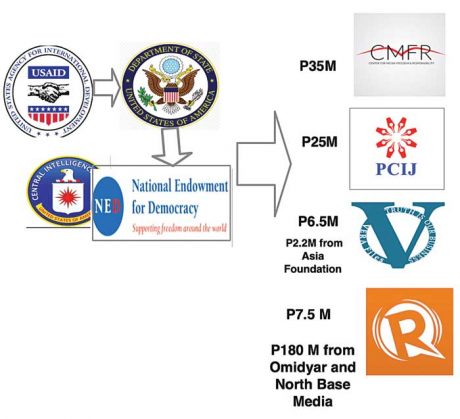 Above: Infographic which identifies part of the funding for Maria Ressa’s “Rappler”. http://www.getrealphlippines.com

18-10-2021: The Nobel Peace Prize arguably lost any semblance of legitimacy when Henry Kissinger, the architect of the US Empire’s war on Vietnam, was awarded it in 1973.[1] Following this travesty, former US President Barack Obama was awarded the Nobel Peace Prize in 2009, barely a year into his first term. A week after receiving the award, he sent 30 000 more US troops into Afghanistan,[2] and went on to carry out a coup in Honduras, bomb Libya to smithereens, and wage an unspeakably barbarous 10-year proxy war on Syria.[3] Today, the farce continues with the 2021 Nobel Peace Prize being jointly awarded to Maria Ressa and Dmitry Muratov. Muratov is an editor of Novaya Gazeta, which is critical of the Kremlin in Russia, albeit with dubious motives. Despite this, the Russian government congratulated Muratov for his years of journalistic work.[4] Maria Ressa, on the other hand, is a more open purveyor of Washington’s drive to war against the People’s Republic of China (PRC).

Who is Maria Ressa?

Maria Ressa is painted by the Western corporate media as a heroic, principled opponent of Philippine President Rodrigo Duterte, who in turn is falsely portrayed as an authoritarian dictator who bows to Beijing. Little could be further from the truth. As the New Atlas points out, Maria Ressa is a US citizen who is funded by the US government,[5] who is consistently pushing the interests of the US state department in its efforts to isolate and eventually bring down the PRC, the most populous nation on Earth. This is done under the familiar guise of calls for “democracy” and “human rights” – which in this case is code for the restoration of capitalism in China, and the installation of US satellite states which are antagonistic or hostile to China, in South East Asia. Ressa is a dual Filipino-American citizen and until 2012, she was the bureau chief of the CNN in Jakarta and Manila for almost 20 years.[6]

In 2012, Ressa became the founder and CEO of Rappler, a so-called digital media company which later became the most prominent critic of the Duterte Administration. In reality, Rappler is a tool of the US State Department, which funds its operations. The National Endowment for Democracy (NED) – the public face of the CIA – admits to funding Rappler to the tune of $180 000 just in the year 2020.[7] Indirectly supporting Rappler, and Ressa herself, is the innocuous sounding International Press Institute (IPI). Making a mockery of its slogan of “defending press freedom since 1950”, the IPI is in fact jointly funded and organised by the very forces of Brussels and Washington. The IPI openly lists its sponsors as including the NED, the European Commission, Qatari Royal Family backed Al Jazeera media, and the Organisation for Security and Co-operation in Europe (OSCE).[8] The OSCE is a mere political arm of NATO – the primary military alliance of US/EU imperialism.

Fomenting war in the Asia-Pacific

Rappler is also funded by Pierre Omidyar, the billionaire founder of Ebay, who plays a similar role to regime change specialist George Soros. The Omidyar Network funds a bevy of news organisations outside the US specifically to run pro-Western information warfare campaigns against governments targeted by Washington. These include the Committee to Protect Journalists (CPJ) and the International Consortium of Investigative Journalism (ICIJ).[9] The ICIJ is currently known for the Pandora Papers, which, not surprisingly, does not name a single corrupt figure from the USA – but plenty from Russia, Latin America and elsewhere. Rappler and its CEO Maria Ressa are not innocent parties carrying out honest investigative journalism – far from it.

While Rappler continuously denounces the Duterte Administration for developing trade and investment ties with China,[10] which cannot but benefit the Philippines, Rappler is the most vociferous in its not so subtle urging of war on China. In fact, under CEO Maria Ressa, Rappler stridently criticises President Duterte for NOT going to war against China. Rappler repeatedly asserts that the Philippines must assert its disputed claims in the South China Sea – which it terms the “West Philippines Sea”.[11] Rappler even couches its demands for war under the guise of blaming Duterte for trying to start a war! To the chagrin of Ressa, President Duterte has repeatedly emphasised that the Philippines does not have the capacity, nor the desire, to go to war with China.[12]  Ms Ressa can claim that she is standing for “human rights” and “democracy” until the cows come home – but in practice she is pressing for what would be a catastrophic US backed war on China in the Asia-Pacific. Some peacenik!

Both the government of the PRC and the Philippines enacted nonsensical and harsh lockdown measures in response to the fraudulent Covid “pandemic”. President Duterte can certainly be criticised for this, even though he stated that he “hates lockdowns”.[13] The conservative bureaucracy of the Communist Party of China, however, imposed scientifically unjustifiable lockdowns and other risible restrictions in order to stabilise and prop up Western imperialism. Workers of the world cannot forgive such a betrayal. Stalinism wrongly assumes that the Western ruling classes can be persuaded to live peacefully alongside a heavily deformed workers’ state such as the PRC. It is prepared to go to any lengths to bring this about – up to and including the imposition of the largest health sham in history.

Despite the active co-operation of Beijing, Washington and the EU will never accept the rule of the working class – however tenuous – over 20% of the world’s population. The PRC’s predominantly state owned and planned economy means it vastly outperforms the West – in science, technology, telecommunications, artificial intelligence and more. Thus, imperialist war against Red China can only be averted if the workers of the West disarm them through socialist revolution. The PRC requires a proletarian political revolution, to initiate workers’ democracy and complete the gains of 1949. Key to this task is the formation of genuine Marxist vanguard parties, East and West, to build internationally integrated planned economies and to permanently end the danger of a devastating Pacific war.

Red Fire is the publication of the Workers League. The Workers League is a socialist organisation which seeks to build Marxist vanguard parties in Australia and internationally.
Read more
Anti-War Change the Name - Change the Date! Climate disruption Counter-rally against "Reclaim Australia" DPRK Drive Out Wicked Campers! featured Hands Off Russia! Indigenous No to War! No War on Syria! People's Republic of China Refugee Rights Shorter working week Stop the War on Yemen!