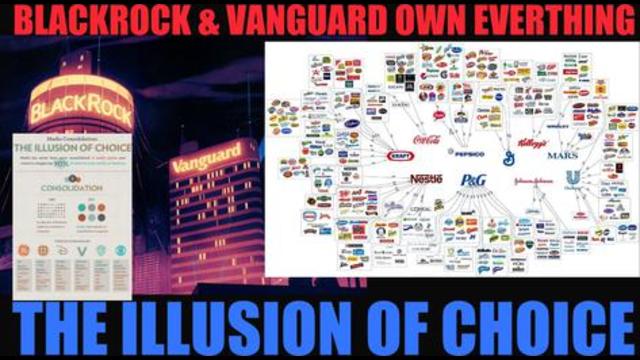 21-01-2022: Despite the variegated views and philosophical outlooks of the component parts of the freedom movement, most shades of it would agree that the Covid “pandemic” is largely a rhetorical and ideological cover both for political repression and for the one of the largest wealth transfers in history. Just during 2020, the wealth of the world’s billionaires rose to $10.2 trillion, while millions of workers lost their livelihoods.[1] So who was driving the Covid agenda? Some claim that ultimately, it emanated from the three largest asset management corporations in the world – Black Rock, State Street and The Vanguard Group. As of January 2021, these “Big Three” controlled 18 trillion dollars’ worth of assets. To put a trillion in perspective, 1 trillion seconds on a time clock would combine to form 31 546 years.[2] The Big Three are the largest investors in 88% of the S & P 500 companies. They hold the leading stakes in Apple, JP Morgan Chase – and Pfizer.[3]

It goes much further. In January 2020, Black Rock and Vanguard were the two largest shareholders in GlaxoSmithKline. At Pfizer, Vanguard is the largest investor while Black Rock is the second largest stockholder.[4] Global Justice Now compiled a report released in December 2020 which outlined just some of the crimes that Big Pharma corporations have carried out as a matter of course. They exposed the misdeeds of Johnson & Johnson, AstraZeneca, GlaxoSmithKline, Gilead, Pfizer, Moderna and Sanofi. Amongst other crimes, Big Pharma spends more on share buybacks to keep stock price high and on dividend payments to shareholders – than they do on research and development of new drugs. Development of vitally needed antibiotics are not undertaken by Big Pharma, as they are not seen as profitable.[5] Black Rock and Vanguard effectively own Big Pharma, through which they drive the Covid “pandemic” – as some claim, and not entirely without basis.

Not content with owning a controlling stake in Big Pharma, Black Rock and Vanguard effectively own Big Tech and Big Media as well. They have investment holdings in Google, YouTube, Facebook, Twitter, Instagram, Amazon, Microsoft, Apple and Reuters. Black Rock and Vanguard are the top two owners of Time Warner, Comcast, Disney and News Corp, i.e., four of the six media companies that control more than 90% of the US media landscape.[6] In Big Tech, among the largest companies we find Apple, Samsung, Alphabet (parent company of Google), Microsoft, Dell, IBM and Sony. These are often interconnected. Facebook owns WhatsApp and Instagram. Alphabet owns Google and YouTube. Microsoft owns Windows and Xbox. All up, four companies produce the software used by almost all computers, tablets, smartphones, electronics and household appliances. And among the top shareholders we consistently find Black Rock and Vanguard – with State Street and Berkshire Hathaway alongside them.[7] These days, control of software is close to control of society.

According to capitalist mythology, competition is necessary to bring out the best in quality and standards. Yet capitalist economic competition leads directly to its opposite – monopoly. Once monopoly is attained, it is an illusion that, for example, Coca-Cola and Pepsi – or Apple and Android – “compete” against each other to provide the best product. Why? Because they are owned by the same shareholders and asset management fund behemoths. Their stock is owned by the same outfits, and invariably at the top of the share ownership pyramid is Black Rock and Vanguard. In fact, Vanguard is the largest shareholder in Black Rock! Oxfam reports say that 1% of the world own more wealth than the other 99% combined. In 2017, 82% of all earned money went to this 1%.[8] Black Rock and Vanguard hold a virtual monopoly on most industries, and they are in turn are owned by the wealthiest families in the world, most of whom have been extremely rich since before the Industrial Revolution.

Yet the understandable concern of gigantic private monopolies owning everything is limited to one side of the world – that of Western imperialism, centred in the USA, with subsidiaries in the European Union (EU), Japan, Australia and so on. Here, the concentration and centralisation of capitalist ownership is a law of the development of generalised commodity production. The almost limitless accumulation of unimaginable wealth at one pole exists alongside poverty or just livable conditions for the overwhelming majority of working people. The duplicitous Covid agenda, which aims to increase the wealth of a tiny minority of billionaires at the expense of the relatively impoverished masses, may well have been largely pushed by Black Rock and Vanguard, or by firms owned and controlled by them. Yet the merging of corporate and state domination is an inevitable outcome – the longer the capitalist mode of production is permitted to stand. That is to say, as long as the working class has not formed its own leadership which can guide the struggle for its overthrow, imperialist capitalism must at a certain stage regress into a form of fascism. Today, this proceeds under the rubric of “Covid”.

Many in the freedom movement, which has bravely resisted Covid repression, point with alarm to the slogan of Klaus Schwab’s World Economic Forum (WEF), that in the “Great Reset” you “will own nothing and be happy”.[11] They fear that the “globalists” will take away all property, leaving us as renters at best. Indeed, it is possible that capitalist conglomerations, if they are not stopped, could buy up all housing stock, and simply rent it out to working people. Yet this “collective” ownership of the capitalists should not at all be confused with collective ownership which occurs after the triumphant overturn of private production for private profit – a socialist revolution. Here, capitalist property is transferred to the overwhelming majority of society, held and defended in trust by a workers’ state – the “dictatorship of the proletariat”. The working class then has collective access to the means of production, whereas previously ownership and control of the means of production – capital – was restricted to millionaires and billionaires. Capitalist ownership of the land, factories, machinery, office buildings etc., does not just mean that workers are condemned to forever sell their labour power to big corporations. It causes extreme alienation, as many sense and feel that they have no stake in society, that society is run for the benefit of the super-rich elites, and so on.

This is exacerbated even further if private corporations start to buy up public land, public transport and facilities such as ports and train lines, the more “neoliberal” capitalism progresses. Where capitalism was happy in the past for the state to own and run public facilities, the ever-falling rate of profit drives capital to return to cannibalise the state which previously provided basic infrastructure. Even if it were a capitalist state which, in the past, owned and operated transport and other facilities, workers could somehow still feel that some parts of society were publicly owned. When this materiel is sold off or bought by private capitalist interests, extreme disenfranchisement and alienation returns, leading to all manner of social malaise. This is because private (capitalist, not personal) property tears society apart, while socially owned property has the effect of binding people together.

Who owns the PRC?

While workers in the West eye the accumulation of trillions by Black Rock and Vanguard with apprehension, 20% of the world’s population are free from such angst. The People’s Republic of China (PRC), through one of the most momentous revolutions in history, overturned capitalism in the process of expelling colonialist domination over their homeland. From the declaration of the PRC on October 1, 1949, social property rather than private capitalist property has prevailed. In the world’s largest country, the vast majority of 1.4 billion people view the PRC as “theirs” – whatever its faults. And so it is. For example, the PRC applies a system of public ownership to all land. Generally, land in urban areas is owned by the state and land in rural areas is owned by “collectives”. The state retains ownership of state-owned land at all times. An investor in such land does not “buy” the land, as in the West. The investor only has the “use” of the land for a certain period – Land Use Rights (LURs). LURs are dispensed by the land authorities of the PRC and confirmed by a certificate issued by the local land bureau.[12] Land, in the PRC, cannot be bought and sold like a product.

Many Western pundits struggle to grasp this fact, and apply Western specific concepts to the PRC, where they do not apply. Large sections of the Western corporate media were awash with alarmist reports that the collapse of Chinese real estate giant Evergrande was imminent, which could trigger a global recession larger than that of 2008. But what happened? Evergrande disclosed 300 billion dollars’ worth of liabilities in June 2021 and “defaulted”. Immediately, local governments then began a process of effective nationalisation.[13] Then in September, the People’s Bank of China injected $19 billion into the banking system to “bailout” Evergrande.[14] Effectively, the state prevented an economic downturn.

There was no “collapse” of Evergrande. Rather, there was an orderly process of local governments effectively renationalising its assets to prevent a collapse. This was assisted by the People’s Bank of China (PBOC), a state-owned bank. It is one of China’s largest, with an estimated 3 trillion dollars’ worth of foreign exchange reserves.[15] Many state owned enterprises (SOEs) are funded by the PBOC, and to a substantial extent it ensures state control over large parts of the PRC’s economy. In fact, to ensure the state retained control over logistics (the means of distribution), in December 2021 the PRC merged five of its largest logistics firms into one – the China Logistics Group.[16] During 2020, the PRC’s central government poured 72 billion dollars’ worth of subsidies into the state-owned Commercial Aviation Corporation of China (COMAC).[17] So the state-owned firm which dominates aviation received huge subsidies – from the state!

Since 2015, the PRC has been the world’s largest steel producer, covering around 51% of the world’s total steel production. Almost all of this steel production comes from PRC state-owned firms such as Hebei Iron and Steel Group, Angang Steel Company, Baosteel, Wuhan Iron and Steel Corp and Jiangsu Shagang Company.[18] According to Mr Schwab’s WEF – no fan of state ownership – the PRC is home to 109 corporations which are listed on the Fortune Global 500, with 94 of them being state-owned.[19] Of the world’s top five companies by revenue in 2020, three of them are based in the PRC, and all three of them – Sinopec Group, State Grid, China National Petroleum – are state owned.[20] While the economies of Western capitalism are in an induced depression, the PRC’s strong state backed economy recorded an amazing 8.1% GDP growth rate in 2021, the fastest growth rate it had achieved in ten years.[21]

While the privately owned capitalist economies in the West are dominated by Black Rock and Vanguard but mired in recession, the PRC with its collectively owned economy protected by its own state – forges ahead with seven league strides. While the PRC remains a bureaucratically deformed workers state, where workers’ democracy is curtailed by a conservative and nationalist caste, it nevertheless demonstrates the superiority of a collectively owned and planned economy. This is the alternative to the hyper-capitalist Western economies, where private monopolies, such as Black Rock and Vanguard, accumulate unspeakable wealth and economic power entirely at the expense of working people.  Despite the Stalinist and Maoist politics of the Communist Party of China (CPC), the PRC indicates what is potentially possible when the proletariat holds the reins of state power.

One thought on “Black Rock, The Vanguard Group: Who Owns Planet Covid?”