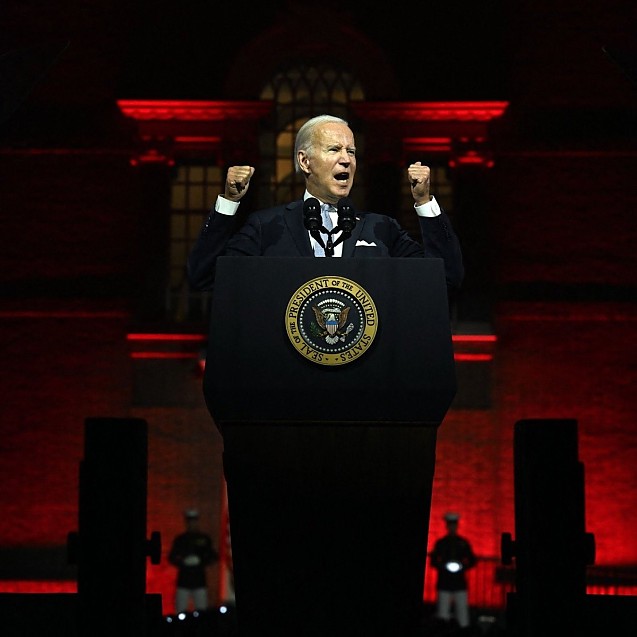 08-09-2022: US President Joe Biden’s speech at Philadelphia’s Independence Hall on the first of September sounds an ominous warning to those who voice disagreement with the Democrats’ increasingly unhinged political agenda. There was little mistaking the intent of the displayed anger of “Dark Brandon” (a play on words from the “Let’s Go Brandon” slogan, which covered for the real crowd chant of “F**k Joe Biden”). Biden, or no doubt his handlers, produced an extraordinarily vitriolic and divisive tirade in words against “MAGA Republicans” (Make America Great Again – the slogan of former president Donald Trump’s 2016 campaign), but which in practice targeted anyone questioning the “liberal world order”. Biden repeatedly railed against MAGA Republicans for supposedly engaging in political violence and not accepting election results, while being heckled by at least one in the audience.[1] This was a reference to the January 6, 2021 protest in Washington DC against electoral fraud in the 2020 Presidential Election, for which there is substantial evidence.[2]

Many denounced the use of blood red lighting against the background of the hall for the speech, which bore an eerie likeness to scenes from the dystopian political thriller V for Vendetta film from 2006.[3] Others described the red backdrop as appearing “satanic and evil”[4], which from some angles is a fair description. Indeed, one described America under the Democrats as being a cross between a banana republic and a cheap horror movie[5], given Biden’s Gestapo like raid on Donald Trump’s Mar-a-Lago estate a month ago.[6] The notion that this FBI action was about classified documents which Trump took home from his time in the White House is absurd.

The US deep state – with almost the entirety of the so-called left in tow – have not stopped in their attempts to criminally convict Trump since 2016, in order to throw him out of office or prevent him from running again for President in 2024. This included two failed attempted impeachments[7]  and a four-year long “Russiagate scandal” which in the end produced nothing but evidence that Hilary Clinton’s campaign had a huge hand in its fabrication.[8] In a clear case of projection, Biden’s Philadelphia speech came one week after he derided the “extreme MAGA philosophy” as a manifestation of “semi-fascism”.[9] Pounding the pulpit at Philadelphia, Biden besmirched MAGA Republicans for allegedly not being normal, a threat to democracy, an enemy of the state and so on ad nauseum. The entire sphere of political liberalism need only to look in the mirror to find evidence of creeping fascism. In fact, MAGA Republicans are only the scarecrow. The real target is differing political opinions.

If any lesson has been learnt from the last two and a half years of a fraudulent “pandemic”, it is that fascism can use any political ideology, as long as it remains on the same class plane. Covid lockdown terror was enforced not with the ideology of ultra-right nationalism, but with that of woke liberalism. This is also the credo of NATO’s horrific proxy war on Russia via Ukraine, which is backfiring spectacularly against the working people of Europe. The fact that Nazi battalions are still part of the Ukrainian state which people in the West are supposed to cheer on and even suffer privation for, highlights liberal hypocrisy yet again. It was not just MAGA Republicans which stridently opposed tyrannical lockdowns, vaccine mandates, facemask mandates and extreme travel restrictions – but the entirety of the freedom movement. This freedom movement contained the largest and most sustained mobilisations in Western political history and is still extant in some countries. Despite some contradictions, this unprecedented resistance rejected the “Woke Imperium” – whether in the form of overseas regime change wars or lawless and mind-boggling political repression under a false pretext of “health”.

Biden’s approval rating hovers around 38%[10], with skyrocketing inflation and cost of living pressures foremost on the minds of most Americans. With the November mid-term elections approaching, the Democrats are set for a wipe-out if this continues. This is arguably one reason for the Democrats’ apparent urgency to inflame the electorate into an “us versus them” fever pitch. Yet it also flows on to the agenda of the Great Reset, championed by the “globalists” of the World Economic Forum (WEF). Their strategy seems to be to deliberately provoke conflict, to drive people against each other, in a repeat of the “good” vaccinated versus the “bad” unvaccinated during the height of Covid repression. Indeed, this may prevent the majority of working people from uniting and rising up against self-serving politicians over ballooning services bills, a collapsing economy and devastating war.

By a quirk of history, liberal parliamentary political parties have been commissioned by their ruling classes to save capitalism using any means up to and including the use of fascism – albeit accompanied by faux progressive rhetoric. The conservative parliamentary political parties and their backers – such as MAGA Republicans – are, to an extent, defending the pre-Covid status quo. This is why conservatives today can appear progressive, while liberals today embody dangerous reaction. In such battles, it is in the interests of working people to defend essential bourgeois democratic rights even if this means working alongside those flying Trump flags and wearing MAGA hats.

At the same time, Trump and MAGA Republicans ultimately offer no solutions for the working people, and in fact agree with their Democrat and liberal opponents on the largest question of all – the defence of capitalism. While some workers are propelled towards Trump in a search for answers to huge political problems, and some fall into line behind the woke agenda, the vast majority feel politically disenfranchised and face the future with trepidation. What is urgently needed is a workers’ party which fights for a workers’ government. Such a party would advance demands which most workers would welcome, such as public ownership of major industries. In the common struggle for such aims, “socialism” may be demystified and posited directly against the Great Reset, catastrophic wars, the skyrocketing cost of living and the loss of elementary political rights. Genuine Marxism could then blaze a path towards the bright future of workers becoming the master of their own house.