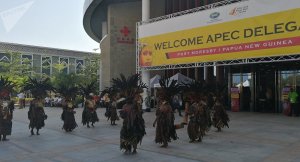 24-11-2018 – Asia Pacific Economic Co-Operation (APEC) meetings are usually straight forward affairs, full of feel good rhetoric about “free” trade and co-operation. This year it is a different story, with no traditional joint communique able to be cobbled together amongst the 21 member states.[1] The corporate media offer the vapid analysis that this was due to tensions between the governments of the United States of America (US) and the People’s Republic of China (PRC). In reality, this year’s APEC summit was one in which the US rulers threatened, yet again, to launch a catastrophic war against Red China.  If triggered, such a war could annihilate millions of innocent human beings. As usual, Washington is backed to the hilt by vassal Canberra politicians, recklessly endangering the entire Asia-Pacific.

Australian Prime Minister Scott Morrison announced the development of the Lombrum naval base, along with the US military at the APEC summit. The Lombrum naval base is on Manus Island, and has not been used as a US base since World War II. The Manus Island  Papua New Guinea (PNG) governor, Charlie Benjamin, stated that the naval base is only in the interests of the US and Australia, not PNG locals.[2] It is the cruelest of ironies, that the base could be expanded on Manus Island, which the Australian government has made notorious by using it as a location for the inhuman torture of refugees and those seeking a safe place to live. To be both a base for the illegal and unjust detention of innocents, as well as a staging post for the potential launching of US led imperialist war, condemns the systems which allow it. The Australian ruling class has already allowed the US to use Darwin as a rotating training ground for thousands of its marines, but Manus Island would be a beach head significantly closer to their target – mainland China.

The language from PRC President Xi Jinping was conciliatory and offered cautious warnings, whereas the language from US Vice President Mike Pence was almost inflammatory. President Xi defended the trillion dollar One Belt One Road (New Silk Road) infrastructure development project as one which has no hidden political agendas, and which targets no one. Vice President Pence, on the other hand, claimed that the US offers its partners no coercion, no drowning countries in a sea of debt, and no compromises on their independence.[3] The US spokesperson retailed bald faced lies when referring obliquely to China’s mutual assistance projects it undertakes throughout Eurasia and the Asia-Pacific. The fact is that the US, mired in a capitalist economic crisis of its making, is not in a position to offer the development assistance that China’s huge state led economy can. The US rulers know that the longer they sit back, the more they will be overtaken by the PRC. Unable to countenance coming second to anyone, let alone an Asian country which 70 years ago was mired in Third World conditions, Washington’s only chance to prevent being overtaken is to launch a cataclysmic war – regardless of the costs.

Mainstream media reports of China and the US refer to “rivalry” and “tensions” between two superpowers, where they sometimes admit that the US is past the peak of its power, whereas China is rising. What they cannot say is that China versus the US today is a case of socialism versus capitalism. Yes, the socialism in China is distorted, imperfect, and sometimes politically misled internally and internationally by the Communist Party of China (CPC). Despite this, China’s rapid advance over the last 30 years clearly demonstrates the superiority of the socialist mode of production, based predominantly on public ownership of the means of production, vis-à-vis the capitalist mode of production based on private ownership of the means of production by a tiny handful of obscenely wealthy elites, as in the West. While world capitalism entered the “Third Slump” in 2008 and has barely recovered, China’s economy powers along, outstripping the West even despite not being able to yet match Western labour productivity overall.

China ended the “century of humiliation” at the hands of the colonial powers in 1949, with the final victory of its socialist revolution. Today, China’s stupendous economic growth is driven by the workers’ state which emerged out of this victory, in which hundreds of millions of workers and peasants overturned feudal and capitalist rule. In the PRC, the banks, transport infrastructure, telecommunications, electricity, shipping, defence industries, space industries, robotics, aircraft and train manufacturing, media, cinema and computer chip manufacturing, amongst other things, are all state owned or majority state owned. And they are all supervised and controlled by the government to ensure they stay within the limits of the five year plan. This has led to stunning breakthroughs by Chinese made technology, with, for example, China leading the way in the production of supercomputers,[4] and being the first country to effect a soft landing on the dark side of the moon.[5]

The capitalist economies of the US, Europe, Japan and Australia, on the other hand, remain mired in effective recession. In Australia, wages in terms of purchasing power have never been lower in history. All governments routinely slash public spending on healthcare, education, public transport, pensions, aged care etc., and funnel it directly to the private sector. This has little effect, the rate of profit continues to fall, and working people suffer the consequences. Poverty and homelessness is skyrocketing in Australia and also the United Kingdom (UK). These governments then try to divert the backlash – onto China!

Working people should not fear China but defend it, in the process of struggling to achieve socialism on these shores. Infrastructure development, decent public transport, banks which provide a low cost service, affordable housing, indeed – a better life – all this and more awaits if workers can prevent Washington and Canberra from launching a calamitous war in the Pacific.