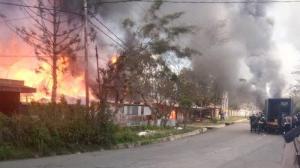 Part of the inferno set ablaze by separatist Papuan militia in Wamena. Image from wwwtribunnews.com

05-10-2019: Parts of West Papua are again in flames, after armed Papuan separatist militia launched an attack on the town of Wamena in the Papuan province of Indonesia. The death toll stands at 30, with 22 of the victims being Indonesian transmigrants, according to Indonesian national police Chief Tito Karnavian.[1] The armed Papuan militia set fire to numerous government and private buildings, leading to some Indonesians being burnt alive after becoming trapped.[2] These deadly attacks by armed Papuan separatists mark a serious turn to anti-Indonesian pogroms which cannot be justified, regardless of history. It reveals the “independence” movement, at the very least, as being politically compromised. Leftists in Australia and internationally need to carefully investigate the situation, rather than being swept into a trance by the slogan of “Free West Papua”.

Throughout history there have been many liberation movements which have fought for a just cause of emancipation from colonialism and imperialism. Over time, left parties and movements have thrown political support behind them, and have thereby stood on the side of elementary justice. The West Papuan case, however, is qualitatively different – in a negative way. A liberation movement forfeits the name if it is involved in ethnic violence, or in murderous acts against civilians or migrants. Unfortunately, armed Papuan separatists have done this repeatedly, and the attacks on Wamena in the last week of September were particularly vicious. By September 27, 1500 Indonesian residents had gathered at Wamena airport in a bid to leave. Local Air Force official Arief Sudjatmiko stated that 2500 people had registered to get aboard flights.[3] They were not fleeing the Indonesian military or security forces. They were fleeing for their lives from Papuan separatists, who were clearly targeting Indonesian transmigrant workers, such as motorbike taxi drivers, shop workers and restaurant waiters.[4] It should go without saying that socialists of any persuasion cannot endorse the wholesale slaughter of workers of any nationality – even if systematic discrimination against one group of workers is proven.

Yet even this does not appear to be the case in West Papua. While it is the case that the Indonesian transmigrants dominate the local economy in the Papuan provinces, there are policies in place to promote Papuans within the civil service.[5] There is a disparity between the coastal cities of West Papua, where transmigrants predominate in economic and commercial activity, and the relatively underdeveloped Papuan central highlands. The lack of development is not entirely the fault of the Indonesian government, but nonetheless the Indonesian government is attempting to spur development in Papua through infrastructure building, such as roads and electricity coverage. There is even an awareness that infrastructure building on its own will not solve all problems. Hence, in 2019, the Indonesian government increased spending on education by 13% across the country, including Papua.[6]  There may well be ways in which the Indonesian government is not administering the Papuan provinces using entirely just methods. For example, there are plans to have the roads built in Papua operate as toll roads.[7] A campaign to remove tolls from the roads would seem necessary. However, as in Australia, such a campaign would have to involve the working class of all nationalities, for lower living costs. It would not usually be a campaign against the road infrastructure itself – but particularly in Papua, where there are relatively few roads.

Not all Papuans are anti-migrant

There is evidence that the anti-migrant dimension of the West Papuan independence movement is not universal. For example, there appears to be peaceful co-habitation amongst indigenous Papuans and Indonesian transmigrants in certain areas. In Wamena during the separatist attacks, some indigenous Papuans helped to shield Indonesian transmigrants from the assaults. They even worked together to guard shops and buildings from the armed separatists – protecting their lives by doing so.[8] There were statements saying that the residents did not know where the armed independence marauders came from – perhaps the highlands. Wamena is the largest town in the central highlands, so it becomes the first target. Some Papuan independence militia claim that they have no issue with transmigrant workers, only those who act as informers for the government and security forces.[9]  In Wamena and elsewhere, however, this is not the case.  What cannot be denied is that the West Papuan independence movement has always had an anti-migrant basis. Romantically minded leftists in the West, who clamour to support West Papuan independence, are either not aware, or wilfully ignore, this base prejudice.

Moreover, it is the “exiled” West Papuans who are the most strident in prosecuting what is often a misleading campaign for separate independence. In the case of the Wamena attacks, Indonesian authorities, not without cause, have accused de-facto independence leader Benny Wenda and his international network of orchestrating the violence in order to make headlines days before the United Nations (UN) general assembly sits in New York.[10] Mr Wenda is no stranger to stoking deadly riots, as he is himself a fugitive for doing just that in Abepura in 2002. Benny Wenda incited a crowd of 50 to attack some shops, which resulted in two people dead.[11] While detained facing trial, he escaped from Indonesia and fled to the United Kingdom (UK). From Oxford in London, the fugitive Mr Wenda convenes a disingenuous campaign for West Papuan independence, particularly appealing to the forces of imperialism against Indonesia. To say the least, a movement which regularly incites violence against those of another ethnicity, often resulting in the slaughter of innocents, is not one to be endorsed.

When violent riots by Papuan separatists break out, the Indonesian government sometimes responds by “throttling” or blocking the internet. While this raises a hue and cry by unenlightened West Papuan independence supporters internationally, this action has a rational basis. Often the violent riots are begun by the spreading of fake videos online, making false claims about mistreatment from Indonesian authorities. In the case of Wamena recently, the bloodthirsty riots were set off by rumours circulated that a high school teacher had used a racist remark against students. Papua police Chief Rudolf Alberth Rodja, however, stressed that the police had investigated the alleged school and teacher, and confirmed that this incident was fabricated, and was a blatant untruth. He said that it is believed that this was hoax information deliberately distributed in order to fuel riots.[12] As Papuan separatists have a history of telling lies in order to whip up support, it is not unreasonable to accept the police account here.

For example, the Papuan separatists told the mother of all lies in December 2018, when they made the preposterous claim that the Indonesian military had used white phosphorus munitions against them in the Nduga region after a flag raising ceremony. They had the active support of corporate journalists who had made the same unsubstantiated claims against the Syrian government during the US led war for regime change.[13] That is, Papuan independence advocates willingly worked with the corporate media which repeatedly referred to ISIS and Al Qaeda as “rebels” and “revolutionaries” in Syria, in order to use the same lies against the Indonesian government. These spurious claims were soon debunked as utterly fallacious, given that the Indonesian military had never stationed artillery in West Papua, let alone million dollar jet fighters. And the only helicopters the Indonesian military has there are transport choppers, unequipped with any offensive weapons, which would be needed to fire ANY ordinance.[14]

West Papuan separatists and their entourage need to spread whoppers because the politics of their independence movement falters at the first question. Prime among the distributors of falsifications is “human rights” lawyer Veronica Koman. Despite being herself of Chinese-Indonesian ancestry, Koman is inherently anti-China and pro-imperialist. On October 1, she posted on her Twitter account a claim of solidarity with the violent Blackshirt rioters in Hong Kong, who in turn claimed solidarity with Uyghurs.[15] The Hong Kong Special Administrative Region (HKSAR) and the Xinjiang Uyghur Autonomous Region (XUAR) are currently targeted by the CIA for destabilisation, and, they hope, regime change. Their aim is to counter the rising socialism of the People’s Republic of China (PRC) by any means – including funding those engaging in armed violence, and up to life-threatening extreme jihadism. But Koman’s anti-socialist fealty to the Pentagon is not the reason she is wanted.

Veronica Koman has been charged with serious crimes by Indonesian police. She refused three times to be questioned, who then charged her with violating the Electronic Information and Transactions Law and the Elimination of Racial and Ethnic Discrimination Law.[16] Racial and ethnic harmony is crucially important in a large multi-ethnic country such as Indonesia. However, Koman had repeatedly been stoking ethnic conflict by posting false information which aided violent riots in Surabaya. Instead of defending herself on charges of provoking deadly unrest and fuelling ethnic conflict, Koman fled to Australia. Understandably, the Indonesian government issued an Interpol red notice for her arrest,[17] but whether this will be enacted by the Australian government remains to be seen. Since fleeing as a fugitive to Australia, she has since appeared on ABC and SBS with favourable coverage, but without mentioning the criminal charges laid against her.  Unfortunately, a lack of basic honesty is de rigueur for pro-US “human rights” advocates.

Some Australian left parties blindly raise both hands when it comes to a request for volunteers for West Papuan independence. They barely lose a step before blundering into yet another international issue without checking its bona fides. Never one to miss a chance to embellish the Australian government, the Socialist Alliance chimes in with a demand that the federal government grant Veronica Koman protection and not hand her over to the Indonesian government. At the least, they display First World disrespect for the legal system of a Third World neighbour. They then pose the rhetorical comparison of West Papua to the case of East Timor.[18] If someone hasn’t told them, comparisons between East Timor – which after a long struggle won independence from Indonesia – and West Papua, are like chalk and cheese. Likewise, Socialist Alternative echoes the East Timor comparison, and swears to uphold all South Pacific struggles for  “self-determination”.[19] The Communist Party of Australia[20] and the Communist Party of Australia Marxist-Leninist[21] both reflexively hail the cross-class “people” of West Papua.

These left parties have forgotten their “Marxism”. Even if it was the case that Papuan militia did not slaughter innocent civilians, did not foster and foment ethnic violence against Indonesians, and did not spread lies and falsifications – Marxists would not automatically endorse self-determination or independence. While Marxists stand against national oppression, advocating the exercise of self-determination is dependent on a number of factors. The most important of these is whether or not it advances the struggle for socialism in that country, in the region, and internationally. Even accounting for the fact that, due to historical factors, the working class of Indonesia is more developed than that of West Papua, there is ample space for working class Papuan and Indonesian collaboration in struggles against capitalism in the region. For example, that which is facilitated by the common language of Bahasa Indonesian.

In stark contrast to liberal and petty-bourgeois nationalists, Marxists do not engage in the shadow boxing of a “good” versus a “bad” nation. What is required are methods of political struggle which advance the class consciousness of workers of all nations. “Self-determination” and/or “independence” may or may not play a role in this process. Either way, efforts to forge Marxist vanguard parties across the entirety of the Asia-Pacific remains essential.