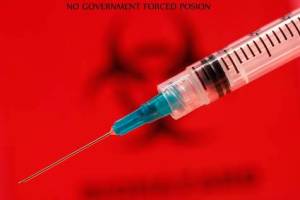 14-02-2021: Russian Roulette. The deadly game where participants place a gun to their head and hope that when they pull the trigger the revolver chamber will be empty is in many respects a close analogy for those who, reluctantly or otherwise, will line up for a vaccine which supposedly will alleviate some symptoms of the alleged illness labelled Covid-19.[1] This is hardly an exaggeration. In the US, the Centres for Disease Control (CDC)’s own Vaccine Adverse Event Reporting System (VAERS) reported 653 deaths amongst 12 697 adverse reactions following Covid-19 vaccinations – and this is just between December 14 2020 and February 4, 2021.[2] Speaking under the condition of anonymity, a Beijing based immunologist called for the halting of Covid vaccinations for the elderly, given that people over 80 have weaker immune systems. This followed a Norwegian government investigation into the deaths of 23 elderly nursing home residents who died after taking the Pfizer-BioNTech vaccine, which found that in 13 cases the Covid vax was the direct cause.[3]

Covid vax is political, not scientific, not medical

The sheer absurdity of attempting to vaccinate the entire world’s population of 7.8 billion people for a claimed disease which, if it exists, has an infection fatality rate of between 0.1 and 0.2%,[4] should be obvious. The global death rate over the past 20 years has remained stable, or has even declined, even during 2020.[5] One does not need ANY scientific or medical qualifications to conclude that there is no pandemic, there was no pandemic, and what has taken place is a malicious fraud. What has and is taking place is the largest assault in history on the working class by the top echelons of finance capital. Primarily this is led by US/EU imperialism, with the treacherous backing of the governments of the non-imperialist powers and nations targeted by the West – the People’s Republic of China (PRC), the Russian Federation, Iran and so on. The sacking of millions of workers, the driving of millions into poverty and desperation, the closure of national and state borders, the shutting down of whole sectors of economies – none of this is carried out in the name of “health”. To claim so invites ridicule.

The attempted administration of any Covid vaccine is entirely political; it is an abomination of both science and medicine. It is yet another fascistic measure introduced to track and trace whole populations, not only abolishing the most elementary civil rights, but singling out those who refuse the vax as dissenters, “anti-vaxxers”, “conspiracy theorists” and other labels. Independent thought is an impediment to an uncontrolled totalitarianism, so those thinking in a way that does not conform must be shunned, ostracised and even taken away to quarantine camps. The labels do not really matter – it is just an “other” which is supposedly harmful to the rest of society, so no questions will be asked when they are removed by people in white coats, or perhaps even the military. The world has been here before, and many can see us heading down the same path today. The difference today is the switching of the roles of “left” and “right”. In the 20th Century, fascist movements arose and were sustained by the forces of the political right, e.g. Mussolini’s Italy, Franco’s Spain and Hitler’s Germany.

2020 saw what appeared to be the reversing of the historical roles of left and right politics. Instead of the right-wing leading a movement of reaction, it is the so-called left which is driving the ultra-conservative repression we see today. Far from being enlightened and pluralist “live and let live” reformers, today’s liberals have been animated by billionaire capitalists as the henchmen of a dark fascism which brooks no opposition. Witness “cancel culture” right up to and including verbal and physical attacks on those not wearing facemasks, or those who simply point out logical inconsistencies with the acts and statements of politicians and health bureaucrats. We stress that these political forces are liberal, they are not “left-wing” in the slightest. Liberals can serve global capitalism more loyally than conservatives, and this is precisely what is now occurring. This confuses many, on both sides of the anti-lockdown and pro-lockdown divide. However, genuine Marxism provides illumination.

During the 20th Century, the capitalist ruling classes handed power to right-wing fascist movements where they arose, and where they feared the alternative would be a left-wing or socialist seizure of power. In Italy, Spain and Germany during the 20s and 30s, the ruling classes utilised fascist forces which were not previously established in the bourgeois parliamentary system. Yet the bourgeoisie is not by any means obligated to use conservative forces to impose fascism. They can use liberal political forces to do so because both liberalism and fascism has the same class basis. That is to say, both liberalism and fascism are political forms of capitalism – the rule of unelected super-wealthy financiers and industrialists based on the exploitation and suppression of working people. The ruling classes may in fact use existing parliamentary parties to introduce and enforce fascist dictates – it does not necessarily need to create new far-right parties. This phenomenon, while novel in history, only increases the need for organised working-class resistance to “woke” capitalism.

All forms of fascism – including the Covidian – issues the working class with an ultimatum; yield or stand and deliver. The proletariat has no choice but to fight for its freedom, and the anti-lockdown movement is already taking the lead around the globe. It has every reason to be optimistic in this struggle, as the overwhelming majority of workers detest lockdowns, forced facemasks and forced vaccines. But many are dismayed, given the base treachery of the lockdown left – fake “socialist” parties, Union officials and social-democrats who have merged with the imperialist state as it imposes the Covid fraud. Whatever their rhetoric, the lockdown left are but the hangmen of Jeff Bezos.

The building of the anti-lockdown movement and resistance to forced vaccines, tracking and tracing, testing, quarantine camps, isolation and facemasks is the first step towards liberation. The permanent elimination of lockdowns will require the formation of workers’ councils as the incipient organs of a new state which can begin to dismantle the old world and lay the basis for the end of the profit system. Public ownership of the means of production and a planned economy will forever end the horror and abuse of Covidian terror, and generations to come will revere those who stood fast.

2 thoughts on “No Forced Covid Vax!”