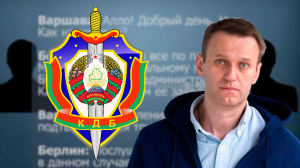 At left, the symbol of the Belarusian internal security service, the KGB. At right, Western backed Russian dissident Alexei Navalny. Image from Periodicodaily.com

06-09-2020 – If we were to believe the Western press, Russian President Vladimir Putin ordered the poisoning of the main opposition leader Alexei Navalny to knock out a rival, to ensure his rule continues. Cue another round of corporate media hue and cry about “human rights” in Russia, leading to another round of sanctions, flowing on to even more US/EU war games literally on Russia’s border. Cue another round of baseless accusations of the Russian government supposedly fixing elections in the US, enabling Brexit, allegedly doping up their athletes with performance enhancing drugs and more. And working people are supposed to swallow these baseless and evidence free claims, so they do not bat an eyelid when the NATO powers push the world closer to a nuclear conflagration.

Jumping the shark, US National Security spokesperson John Ullyot claimed that the Russian people have a right to express their views peacefully without fear of retribution (!). German President Angela Merkel claimed that tests showed that Navalny was poisoned with a chemical nerve agent from the Novichok group and called it attempted murder.[1] It should not be necessary to point out the absurdity of such claims. For one thing, there is not one speck of evidence that the Russian government caused Mr Navalny’s current illness. Nor is there a shred of evidence that Mr Navalny was poisoned at all, let alone with Novichok. What happened was that Mr Navalny fell ill and was taken to the emergency section of the Omsk hospital in Russia. There, Russian doctors worked feverishly for 44 hours to save his life. Russian medical specialists stressed that all that could be said was that Mr Navalny’s cholinesterase activity was low, but there was NO evidence that this was due to poisoning with cholinesterase inhibitors.[2]

Mr Navalny was then flown to Berlin for continued medical treatment, which was organised and funded by the Western backed NGO “Cinema for Peace”.[3] This alone should raise eyebrows. It raises the question of why the Russian government would allow Mr Navalny to be flown immediately to Berlin if it had just arranged his poisoning. Furthermore, no traces of any unusual substances were found in the two Russian laboratories which analysed the blood tests of the sick Mr Navalny.[4] After the debacle of the false flag poisoning of former Russian double agent Sergei Skripal and his daughter Yulia, who somehow survived being smeared with the deadly military grade nerve agent Novichok,[5] workers are entitled to be just a little more than usually sceptical of this latest claim.

Western corporate media outlets continually infer that Navalny is the primary “opposition leader”. This is farcical. Navalny is part of the pro-US liberal opposition to the Russian government and President Putin who has extremely minimal domestic political support – around 2%.[6] The real opposition are the parties which call themselves Communist, who have wide support within Russia. Navalny, on the other hand, is the US government’s favourite – because it funds him. He has received financial backing[7] from the notorious National Endowment for Democracy (NED) – the public relations arm of the CIA – for the running of the Democratic Alternative (DA!) party. One can imagine the outcry in the West if it was discovered that a dissident residing in the US somehow received funding from the Russian government for a US opposition party. Regardless, Navalny is put on a false pedestal by the elites in the West to enable the fuelling of yet more war provocations against Russia. On September 1, the Russian government protested vociferously at the restarting of yet more NATO military exercises on Russia’s border, this time in Estonia.[8]

Estonia borders Belarus, which is the base of the latest NATO backed colour revolution against Belarusian President Alexander Lukashenko. Despite the best efforts of NATO and its agents, the transparent subversion failed, not least because they did not have a collection of muscle-bound ultra-reactionary and fanatically anti-Russian men to arm – unlike during the “UkroNazi” coup in Ukraine in 2014.[9] The US Empire has been itching for a chance to get rid of Lukashenko, over and above the wishes of the majority of Belarusians, for decades. Lukashenko never totally de-Sovietised Belarus, a high crime in the eyes of imperialism. This is not to say that Lukashenko was without fault, for he also flirted with the very NATO states bent on his removal perhaps in an effort to better bargain with Russia. Yet as far as the Western governments and their agents were concerned, the final straw was Lukashenko’s courageous stand on the fake Covid-19 “pandemic”. Lukashenko rightly considered panic about this particular coronavirus to be more dangerous than the pathogen itself.[10]

It can also be plausibly argued that the fake Navalny “poisoning” may also have been arranged by the deep states of the West so as to derail Nord Stream 2. This is a gas pipeline extending from Vyborg in Russia to Greifswald in Germany. The US government is apoplectic with rage at the prospect of the completion of the pipeline connecting Russia and Germany, as it will allow Russia to sell its hydrocarbons to Europe directly, without the ability of the US to do anything about it.[11] To the advantage of Europe and Russia, Nord Stream 2 bypasses the Ukraine entirely, meaning neither party has to deal with the political and military instability wrought by the NATO backed UkroNazi coup government installed in Kiev in 2014.

Working people have a direct interest in defending Belarus against US backed subversion, and Russia against NATO-led imperialism. This is despite the fact that the Belarusian government wisely rejected the contrived Covid-19 crisis, while the Russian government played up to the manufactured hype of Covid-19. The Russian government even imposed harsh lockdown measures, mimicking those of the Western governments that are continually staging false flags so as to blame Russia for anything and everything under the sun. Be that as it may, NATO led provocations against Belarus and Russia must be strongly opposed by workers internationally, as part of a struggle against war and for socialism.