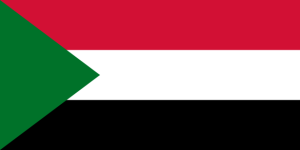 10-02-2019:  In the horn of Africa, some Sudanese people move onto the streets to protest against the price of bread. The demonstrations soon force a response from the government, which moves to prevent them from spreading. The demonstrators call for the overthrow of the state. For the left internationally, on the surface it appears to be a straight forward case – we back the people who are demanding bread – or do we?  In Africa in 2019, things are not at all what they seem.

After the experience of Libya, Syria, Ukraine and now Venezuela, working people need to be alert to any suspected regime change effort by the US Empire. And in Sudan currently, all the hallmarks of yet another attempt to overthrow yet another “regime” which is independent of Washington are there. How can we determine this? One giveaway is the fact that the demand for cheaper bread almost immediately became a call for regime change. This is usually a tell-tale sign that imperialism is fomenting yet another hybrid war for the overturn of a state. Another sign is that the protestors immediately moved to burn down offices of the ruling National Congress Party, headed by President Omar Al-Bashir[1], and set fire to some government vehicles. Suffice to say that demanding cheaper bread at the same time as knee-jerk pyromania is more than a little suspicious.

Another sign that the current protests in Sudan are not the genuine article is the fact that they broke out immediately after Al-Bashir met with Syria’s President Bashar Al-Assad in Damascus on December 16. What is more, President Bashir was flown from the Sudanese capital Khartoum to Damascus in Russian military aircraft.[2] This visit made Bashir the first Arabic leader of a country to visit Al-Assad in eight years – during the time of the West’s proxy war for regime change against Syria. Al-Bashir’s visit to President Assad seemed to be intended to mark a public display of reality in Syria – the war for regime change waged by the US government is over, and Syria will, for now, remain independent. It also seemed to be an intentional display of the re-alignment of Bashir’s government away from Saudi Arabia and the Gulf monarchies, and towards Russia and Syria. Workers can be thankful for small mercies such as this. The Sudanese government’s participation in the Saudi led war on Yemen is almost unforgivable. Bashir’s government reportedly sent four attack aircraft and up to 10 000 troops to take part in the attempted suppression of the Houthis defending Yemen.[3] The war on Yemen was a spin-off of the failed regime change war against Syria, and Al-Bashir’s participation in this war against fellow Arabs should be condemned, despite an apparent need now to defend Sudan against US led regime change.

Bashir’s tilt away from Saudi Arabia and the Gulf monarchies such as Qatar and the United Arab Emirates (UAE), and towards Syria and Russia is to be welcomed, if only to counter the nefarious ends of US imperialist pressure on Sudan. Despite the US government recently lifting crippling sanctions on Sudan, President Bashir claims – not without foundation – that the US seeks the balkanisation of Sudan into five parts. Bashir stated that Sudan sought Russian made S-300 anti-missile protection systems and SU-35s (advanced Russian fighter jets) in order to protect themselves from a US onslaught seeking to shatter the country.[4] In contrast to the decision to assist the war on Yemen, this decision is a rational one. The US was transparently behind the moves to separate South Sudan from Sudan in 2011, when it backed the “Christian” south against the “Muslim” north.[5] What is more, this campaign, which inevitably led to further war, was backed by Hollywood celebrities including Don Cheadle, Mark Wahlberg and the notorious US imperialist adjunct George Clooney.[6] George Clooney would go on to make moves to produce a film glorifying the Al-Qaeda outfit “The White Helmets” in Syria, which made fake videos falsely portraying them as “rescuers”.[7] Even with Hollywood’s backing, the US Empire and their Al-Qaeda proxies were defeated in Syria with the assistance of Russian air power – particularly the SU-35. Hence, Bashir’s desire for a stock of these jets for Sudan.

As is now customary, US ruling class designs in Africa are consistently overhauled in an attempt to ward off the assistance offered by Red China. Any means which can disrupt trade, investment, healthcare or infrastructure development assistance offered by the world’s largest socialist power to African countries, will be considered or carried out by Washington. This includes all measures up to and including the stoking of fratricidal wars. All of this is under the watchful eye of AFRICOM – the US Empire’s strategic command for the African continent. And AFRICOM takes a dim view of China’s New Silk Road (One Belt One Road – OBOR), which seeks to link Africa and Asia to Europe through mutually beneficial construction of roads, ports and railways. Heaven forbid that African countries should accept development assistance from the predominantly planned and collectivised Chinese economy! Given that Sudan is a strategic hub of the African section of the New Silk Road, it follows that Sudan is thus a prime target for a hybrid political/psychological/diplomatic war.

To give just one example, in 2017 it was announced that China would build a railway connecting the strategic Port Sudan on the edge of the Red Sea to the Chadian capital N’Djamena. This will allow surrounding Eastern African countries such as Cameroon and Nigeria a link to the sea port at Port Sudan – a link to Europe and Asia.[8] The US ruling class, from their point of view, simply cannot stand by and allow any African country to develop, or at the least, not through Washington. China, with its economy operating on a fundamentally different basis to predatory imperialism, has nothing to fear and everything to gain from the rise of African countries out of Third World status. The US economy, based on private profit – cannot tolerate any competition whatsoever. The Chinese economy, which does not operate primarily on private profit, but according to its Five Year Plans, welcomes trading partners, cultural exchanges, and friendly political alliances. Hence – the US covert war for regime change in many parts of Africa. Today Sudan, tomorrow Nigeria, and on and on it goes.

US admits one of their own behind the “protests”

Sometimes the hand of the US deep state reveals itself, and in this case, its involvement in the regime change protests in Sudan. The “Voice of America” – US state department propaganda pumped around the world – admitted in a recent article that Rudwan Dawod helped organise the recent protests in Sudan.[9] Mr Dawod, the article states, is a Sudanese-American politician. He lives sometimes in Oregon in the US, and sometimes in Khartoum. He heads up the transparently dubious “Sudan of the Future” campaign, and when in Khartoum he is employed by “Sudan Sunrise” – an openly US funded NGO.[10] Mr Dawod has previously been arrested by Sudanese authorities, apparently on suspicion of spying for both the US and South Sudan. Given his employment by a US backed NGO, such suspicions have more than reasonable grounds. US backed NGOs are planted around the globe, endlessly plotting regime change on behalf of their benefactors, in Russia, China and Iran. The addition of Sudan to this list would surprise no one.

Always eager to be the first in line to call for regime change in a country targeted by US imperialism, the Socialist Alliance (SA) has leapt into the fray. Seemingly SA has drawn no lessons from its strident backing of the US led wars for regime change against Libya and Syria, and has even deepened the errors. Its newspaper Green Left Weekly is replete with articles urging the overthrow of Sudan, seemingly oblivious to the fact that the contrived protests in Sudan do not appear to have gained anything other than token support across the East African country, which has a population of 40 million people. The photos of the “mass rallies” in Sudan are the classical narrow angle photo, which only shows a section of a small crowd, falsely implying a huge attendance. Even aside from this, basic Marxists should know just by the title of the declaration of the opposition parties, that this is an orchestrated pro-Western coup, with some backing from domestic conservative forces. The “Declaration of Freedom and Change”[12] sounds wonderful for the well paid technical staff of the Sudanese Professionals Association, but will do nothing for poor and working class Sudanese. In fact, US backed regime change in Sudan, which blocked off development assistance offered by China, will be disastrous for them.

“Freedom and Change” cannot be won through the US Empire

This is not to deny socio-economic and political problems for the working class of Sudan. Similar issues exist in all countries, but especially in African countries which are still prevented from developing as one consequence of the history of European colonialism. If US and European imperialism did not exist at all, if there was no military, political, financial or diplomatic interference in Sudan, or in Africa as a whole, from the ruling classes of the United Kingdom (former colonial ruler) and the United States, there is a small possibility that workers internationally could come behind political movements in Sudan – even ones aimed at forming a new government. But this fantasy world does not exist. Imperialism – the expansionary needs of financial capital from the First World “great” powers – has created the political problems in Africa, and it will remain until it is overthrown – principally by workers in “their own” centres.

IF there was political movement in Sudan which was clearly leading a struggle for socialism, for workers’ power, and IF this movement was led by parties or a party which made its call for a workers’ government in Sudan and throughout Africa, and IF this movement made it crystal clear that it opposed the interference of US imperialism in toto, THEN workers internationally could look at engaging with such a movement in a supportive manner.  IF any of these characteristics were present, or anything even leaning in such a direction, it MAY be worth looking at a position of critical support for such a movement. Marxism, as Lenin stressed repeatedly, is the concrete analysis of concrete conditions. Leftists have to analyse each set of circumstances on a case by case basis.

The contrived political protests in Sudan today do not meet ANY of even the most basic pre-conditions that would lead to the beginnings of critical support. Not only does the US state department admit that one of its citizens was organising the protests, part of the Sudanese “opposition” admits it has met with high level US consular staff. For example, the opposition Sudan Call alliance met with US Ambassador Steven Koutsis, at their request, in London in September 2018, to “discuss their position on the peace talks and democratic process”.[13] After the experience of the regime wars on Afghanistan, Iraq, Libya, Syria, and attempts at regime change in Ukraine and Iran, amongst others, one can imagine how the US state department views a “democratic process” !!

Working people in Sudan have an interest in opposing, not backing, US imperialist plans for their country. While maintaining their political independence, state and non-state development assistance offered on good terms from socialist China should be welcomed, and even leveraged against the aims of AFRICOM. Socialists internationally should seek to expose the role of the US Empire in Africa, while extending efforts to forge genuine Marxist vanguard parties – the key element of true internationalism.