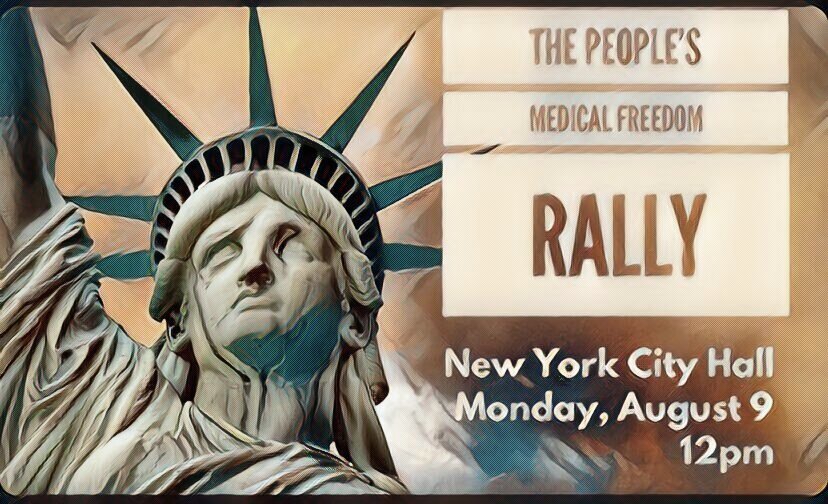 In August, at one of our rallies at City Hall, one of the speakers, a recently fired because un-vaxxed teacher, introduced himself as a socialist–and was roundly heckled by many in the audience. At many of our rallies, official stooges like Biden and DeBlasio are portrayed as “Marxists” wearing Che Guevara T-shirts. We read posts by conservative leaders of the movement denouncing the Great Reset and these mRNA mandates as “communist” and “socialist,” and denouncing Karl Marx as an evil man who hated the middle class.

We don’t think we are being overly sensitive here. But we the socialists in this movement want to say:

Oh, please stop it! You are fundamentally mistaken about our views, and what we have to contribute to this movement. Which we, very humbly, believe to be a better analysis of the crisis we are facing now, and a better program, and strategy, for overcoming it. We think our ideas are worthy of debate, not censure or caricature.

It is true that many socialists today, like many liberals, have come to accept these mandates. There are plenty of former radicals, like Noam Chomsky, for example, who have been completely duped by this Great Reset. But such betrayals are not intrinsic to the ideology of socialism. We are living proof of that.

Scientism, not socialism, is at fault here: the Progressive liberal belief that putting scientists in charge of our health makes everything OK. Ironically, the professional middle-class Progressives offered this “solution” to robber baron capitalism, as an alternative to working class socialism–one which they unrealistically (as well as undemocratically) believed would put their class in charge of society rather than either the working or the capitalist class, to the benefit of society. Instead, they only prepared the way for and promoted the rise of corporate capitalism.

The problems with this scientistic view are well expressed by Dr. Peter Breggin and Ginger Breggin (neither of whom are socialists, unfortunately) in their book, COVID-19 and the Global Predators: We Are the Prey:

“Science! We have been told science must be relied upon to make our decisions when dealing with the pandemic called COVID-19. We must in effect bow down to science, no matter how humiliating and painful it may seem to our unscientific minds. But science has an Achilles’ heel—a fatal flaw that can completely ruin it and frequently does. What is the fatal flaw of science? It is conducted by human beings. Where serious scientific controversies and conflicts of interest exist, science is no more reliable than politics … or heaven forbid … no more reliable than religion. Science is only as dependable as the people who conduct and disseminate it. The adage for judging opinions still holds true—consider the source! Similarly, the adage for finding corruption still holds true—follow the money. –Covid 19 and the Global Predators: We Are the Prey.”

Unfortunately, and unwittingly, most socialists we have encountered have been duped by this view, to the point where they accept the authority on the matter of these biologics of eugenicist billionaire Bill Gates, who never even graduated from college, and his Mafia button-man, Dr. Anthony “The Science” Fauci. But Marxism and socialism offer great resources for understanding why we can’t “trust the science,” especially science that has been thoroughly corrupted by these global billionaires behind the Great Reset.  We understand that the state, as well as the media, is controlled and corrupted by the capitalists, and always serves their profit-seeking, exploitative agenda. “The modern representative state,” Marx and Engels argued in their Communist Manifesto, “is the means by which the bourgeoisie gains sway over society.” Is this integral Marxist view in any way compatible with the current liberal belief that any state official, but particularly, a corrupt Pharma shill like Anthony Fauci can be trusted implicitly, without a scintilla of scientific evidence for his draconian measures?!!!

Marxism is not statist. Marx and Engels called upon workers to “smash the state.” It is true that the Russian experiment in socialism–under the enormous pressure of the imperialist powers–became horribly and murderously bureaucratic, under Josef Stalin. But Stalinism is a grotesque caricature of Marxism. Klaus Schwab’s program that everyone except his billionaire class will “own nothing and be happy” has a superficial resemblance to Stalinism (although it much more closely resembles Nazism!). But Marx and Engels called for the working class to control the means of production in common, so that the exploitation of labour to make profit might be ended–while leaving individuals their possessions.

Marxists do not support suppression of religion. Marx and Engels were atheists, but they believed that religion would “wither away” as socialism made our lives here on Earth more fulfilling. Some socialists, like Dorothy Day, were Catholic. Others, like Erich Fromm, believed in the need for religion, in the sense of a body of moral principles that put the welfare of humanity first. So you see on that score, too, we are not aiming to harm anybody.

Conservative leaders of our movement argue that the present crisis is some sort of fluke, or the product of a moral failure on the part of government leaders to withstand the billionaires’ corruption, and that we can return to a golden age where each of us can aspire to become small scale entrepreneurs within a free market economy, while treating each other with decency and respect. But Marxists consider this to be a pipe dream. While we can’t get into the nitty gritty details, the essential dynamics of capitalism, we believe, are such that, as Marx wrote in Das Kapital, “the big capitals will always beat out the smaller.” These dynamics will always lead to economic crises and the centralization of capital into fewer and fewer hands, to the point where any such ideal free market state will land us right back in the crisis we are now in, confronting sociopathic billionaires who seek to drastically reduce our numbers and enslave us.

We believe that the only class in our society capable of overthrowing these bastards is the working class. This class alone can shut down production and seize the levers of our economy, smash the state, and create a truly democratic, just, fair society.

Many of you will probably not agree with us on a lot of this. But we ask that you agree to disagree, and to debate rather than dismiss and vilify us. Is it a deal? We would like to be your colleagues and comrades in this heroic fight to save humanity.