No to Nuclear War! Hands Off the DPRK, China, Syria, Russia!

As usual, Canberra has signed the Australian military up to every one of the current theatres of war the US threatens to unleash. Foreign Minister Julie Bishop had the temerity to state that “The North Korean Government should invest in the welfare of its long suffering citizens, rather than weapons of mass destruction”.[1] This level of hypocrisy can only be reached by those defending an unjust system. It is the Australian Government which, for 30 years or more, has been ripping out investment in the welfare of Australian citizens, with casual indifference to the suffering it causes. Decades of funding cuts to education, healthcare, unemployment and disability services, aged care, pensions, public transport, legal aid, and so on ad nauseum, have not slowed down, but have accelerated. The government has slashed public sector employment, and is idly sitting by while thousands upon thousands of jobs are being eliminated as private industry downsizes or closes down.

Meanwhile, the government of the DPRK, on the other hand, has maintained its form of a socialist system which guarantees its citizens employment, healthcare and education at no cost, housing at no cost, while doing away with the need for personal income tax.[2] DPRK citizens have enjoyed completely free heathcare since 1960, and completely free education since 1959. Women in the DPRK can retire on a full pension at age 55, while men can retire on a full pension at age 60.[3] Just who is it that is not investing in the welfare of its citizens?

Moreover, the government of the DPRK has clearly stated, on many occasions, that it will only use the weapons it has if it is attacked first. The 7th Congress of the Korean Workers Party in 2016 confirmed its stance of “no first use” of its nuclear weapons.[4] China has declared its “no first use” policy of its nuclear weapons program in 1964, and has maintained that ever since.[5] No matter how strong the barrage of Western corporate media demonises the DPRK, and for that matter China, it will not change these facts.

Facts mean little to an empire fighting to maintain its declining claim to be world number one, however. The war for regime change against Syria has arguably been accompanied by levels of government and mainstream media lies which have been unprecedented in history. The latest attempt to blame the Syrian government for using chemical weapons was pathetic. The fact that the French foreign minister jumped to conclusions about the alleged incident in Khan Sheikhoun in Syria seems to indicate French government involvement in the incident itself.[6] Regardless of one’s opinions about the Russian government, the fact is that the Russian military campaign to defeat ISIS, at the invitation of the Syrian government, had turned the tide against the US backed mercenaries, and may have already prevented a wider war from breaking out.

Working people should be aware that the threats of nuclear war stem from one side – the system of capitalist-imperialism, headed by the rulers of the United States. It is the US and their allies, which include the governments of Australia, the United Kingdom, France, Canada, Saudi Arabia, Israel and others – who threaten to unleash apocalyptic war. The governments of China and Russia, for different reasons, have no interest and no need for such a catastrophic conflict. Temporarily at least, the interests of those governments resisting the US Empire – China, Russia, Iran, the DPRK, Syria etc. – and the interests of the working people of the world are coinciding.

No matter how grim the situation appears, we can be confident that the overwhelming majority of working people strongly oppose a world war, and will be prepared to take action to prevent it. The attempted war for regime change against Syria for the last six years has largely sorted out those who are really opposed to war, and those who make apologies for it. Working people need to demand that their Unions at least assist the building of a serious anti-imperialist anti-war movement. Their leaders, and the leaders of moderate parliamentary and extra-parliamentary groups will have to be pushed aside if they choose their careers over the survival of our children. NO TO  NUCLEAR WAR!     HANDS OFF THE DPRK, CHINA, SYRIA, RUSSIA! 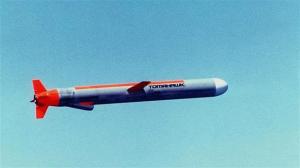 A tomahawk cruise missile, similar to the ones fired at Syria by the US recently. Image from http://www.presstv.ir